In this lesson, we’re going to cover the Korean question words. These are words that you can use to ask questions, which is really important for having conversations in Korean.

Once you learn these Korean question words, you will be able to ask many questions from your Korean friends and also understand the questions they’ll want to ask you. 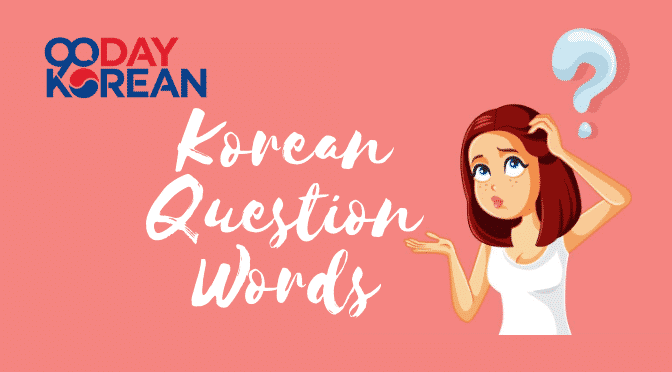 Here are the most common question words in the Korean language. Using these will help speed up your language learning by allowing you to have conversations right away.

How to Use Korean Question Words

To make your learning as easy as possible, we’ll also show you a sample sentence of each question word. There may also be some notes near the question words if there are special cases. We’ve included the English translation as well as the sentence in romanized English.

The question word 뭐 is the shortened form of 무엇. You’ll likely see 뭐 used most of the time, but it’s useful to learn both words.

What is your name?

The example question below is one of the basic questions you’ll hear when having conversations in Korean. Make sure you know how to answer this one. We have two great resources on how to learn Korean dates and Korean numbers.

When did you come to Korea?

You can put this question word in various parts of the sentence, but typically it is placed just before the verb. Often you’ll see Korean particles such as 부터 and 까지 to indicate “from” and “until” when something happens.

This is another common question that you’re bound to hear if you’re learning the Korean language. To reply, you need to know the name of your country in Korean. You can find a list of countries in Korean on this page. Some of the countries sound like the country’s name in English, and some don’t.

Where are you from?

Who is your best friend?

You can also use this question word on it’s own to say why. For example, you can ask 왜 or 왜요. The former is informal, and the latter is a standard version you can use with anyone. You can place this word anywhere before the verb. Most of the time it appears in front of the verb.

Why do you study Korean?

Which university do you go to?

How did you meet your boyfriend?

어떤 (eotteon) – What kind of

What kind of food do you like the most?

What (kind of) smell is this?

How much time will it take from your home to Hongdae?

How much does one banana cost?

Big congratulations! You have just learned the commonly used Korean question words! Now you can immediately go and start asking all the burning questions you’ve wanted to ask your Korean friends. Make sure to put the sample sentences to use so you can practice the language right away.

We’d also love to see your own sample sentence in the comments below! Remember that if you have any questions on the lesson topic we have just covered, we’re always happy to help. And when you’re ready for more, check out our full list of Korean phrases!

← Minimum Wage and Average Salary 6.1 How to Write Korean Letters →